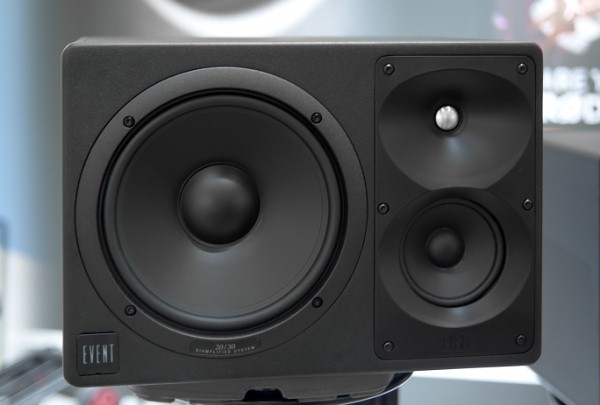 Since Rode Microphones took over Event Electronics back in 2006, the company has gone gangbusters, producing quality speakers to suit high-end and budget studios alike. When its Australian manufactured flagship ‘Opals’ first hit the market in 2009 I was amazed by their quality and power – and as it happens they’ve been sitting on my Neve console ever since. They’re amazing speakers.

More recently (2011) the two-way active next generation Event 2020 BAS speakers hit the market. These also sounded fantastic, though much more modest in their construction and price than the Opals. But with my eyes shut it was hard to say which ones I liked better. From that moment on I pitied owners of esoteric speaker companies.

Now there’s an Event 2030 rear-ported three-way active studio monitor on the market. The 2030s are of a similar construction to the 2020s, offering the same incredible bang for buck.

Handy for consoles like mine that tend to be a bit tall to comfortably accommodate vertically aligned two-ways without them firing over your head, the 2030s come configured horizontally as dedicated left and right pairs.

The rear panel of the MDF cabinet is a fairly simple affair, featuring a port, and three variable pots that adjust gain up to ±12dB, top-end above 2kHz (±3dB) and lows below 200Hz ±3dB (or 400 – depending on where you derive your specs from. The back of my speakers say 400, the paperwork disagrees. No big deal.

However, how variable pots that don’t even possess centre indents find their way onto devices as precise as speakers I will never know. I can tolerate them on parametrics, but on speakers it just seems inappropriate. The only justification for it might be that the shelving filter adjustments on the 2030s are fairly small – a full crank of the pot only derives ±3dB. The same can’t be said of the gain pot.

Sonically however, these speakers are quite remarkable for the price… or indeed any price. I’ve heard speakers worth 10 times as much sound no better, and often-times worse. Being three-ways their coverage down through the lower midrange and into the low end is beautifully balanced, making my vastly more expensive Questeds sound decidedly hollow.

I’ve always wanted some great sounding three-ways for precisely this reason… finally they’re here. Truly balanced, smooth and powerful, the 2030s would, without question, make a brilliant, economical, and valuable monitoring addition to any studio, large or small.

In Australia, contact Event Electronics for more info: (02) 9648 5855 or craig.parker@eventelectronics.com